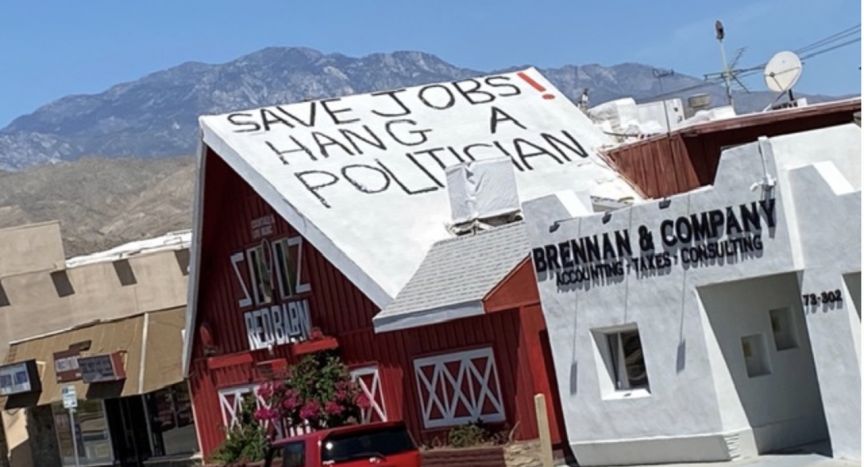 Wednesday morning a new sign was displayed on the roof of Palm Desert bar, Red Barn. The owner admitted to making up the slogan, and said he paid someone to paint it on the roof. It read: “Save jobs! Hang a politician.”

A second message on the other side of the bar read: “Suck My Governor.” Both messages have attracted lots of attention. Several people driving along Highway 111 in Palm Desert stopped to take a closer look. Some got out of their cars to take pictures.

“It shocked us. It took us by surprise to the point where we turned around to take a picture of it so we could try to figure out some place to report it because we think it’s wholly inappropriate,” Palm Desert resident, Janet said.

“I totally agree with the sign and I think that the governor should set his people free,” said one Palm Desert resident who did not disclose her name.

Others were in vehement opposition of the signs.

“I certainly consider this hate speech. The city of Palm Desert needs to take this down right away,” Palm Desert resident, Maggie said. “I do not believe that anybody should put such hateful things up and incite people to riot, and that will actually create more hateful problems than we already have today.”

A tax and financial services business owner next door said he understands that everyone is frustrated at this time.

“I don’t necessarily agree with the substance of it but I’m not necessarily in agreement with the way they put it,” Brennan & Company owner, Dylan Brennan said.

Red Barn owner, John Labrano, defended the signs and said they “needed to be brought forward.”

“All I want to do is run my business. Leave me alone, let me operate my business and move on. I don’t need the state’s help,” Labrano said.

The bar has been closed for nearly 2 months. Labrano said he’s tired of seeing inconsistencies with the shut down.

“It’s a little frustrating when you see businesses operating like nothing. The mattress store, the golf cart store, the liquor store. It doesn’t matter– everybody is operating. If this is a shut down, shut it down,” Labrano said.

He said it’s time to save his bar and get his employees back to work. Labrano took over Red Barn 8 years ago and said this is the first time they’ve ever closed.

“I think the virus is a terrible thing it needs to be taken care of but at the same time we have to be able to conduct business and go about our lives,” he said.

While rooftop bars are prohibited in Palm Desert, the city is concerned with regulating what they describe as political expression.

“It’s unfortunate. We’ve looked into it legally to make sure that we’re not allowing something that would be inappropriate or would be hate speech. As far as we can tell with the city and our legal experts can tell, it’s freedom of speech,” Palm Desert City Council Member Jan Harnik said.

Harnik said she hopes that a more positive message could be spread during this time.

Despite state orders, Labrano plans on reopening the bar some time next week, and is looking at what safety measures he will implement. 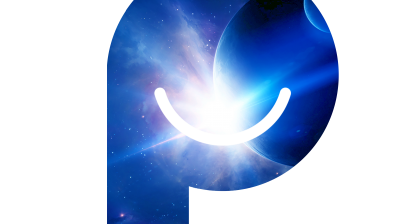 23andMe Funding Research to Increase Diversity of Genetic Data
May 10, 2019

Nature’s 9 Most Powerful Medicinal Plants and the Science Behind Them
January 5, 2021 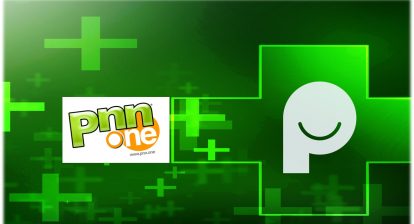 What People with HIV Need to Know About the New Coronavirus
March 12, 2020 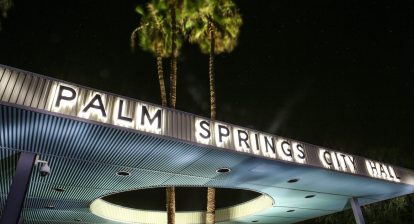 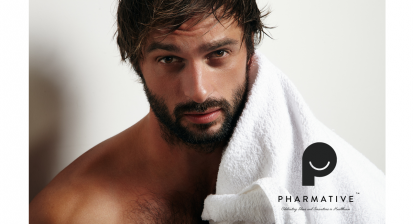